In The Background: Art You May Never Notice

After retiring from the American Museum of Natural History in New York, Fred F. Scherer lived in Friendship and worked for 20 years as a consultant for the Maine State Museum.

Through his true-to-life, scaled-down recreations of the environment, the painter and sculptor created a unique window from which to consider the natural world. 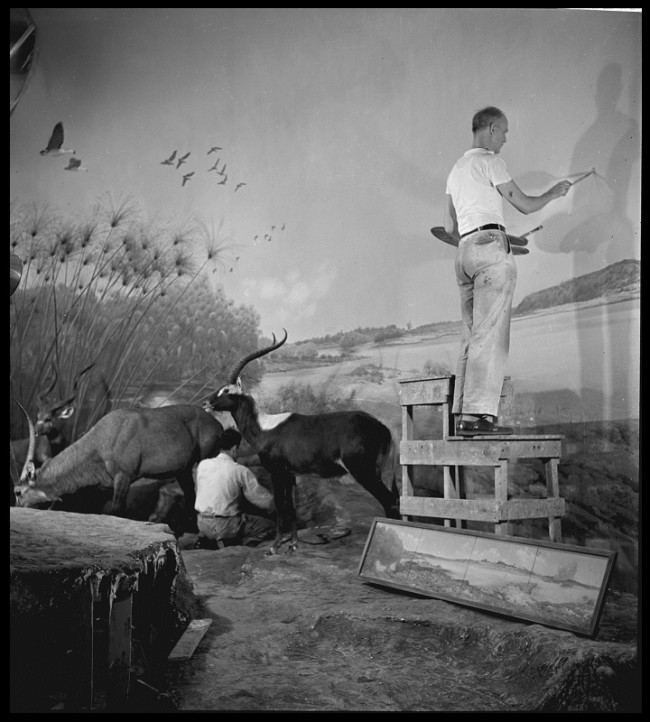 Painter of Famous Dioramas Dies at 98

Some of the best-loved and most-seen New York City museum art is by Fred Scherer, an artist who for decades painted dioramas at the American Museum of Natural History.

Mr. Scherer, who died Nov. 25 at age 98, contributed to well over a dozen of the dioramas, which were created by teams of scientists, taxidermists and artists at the museum to depict animals in their natural settings.

New installations were eagerly awaited in an era largely devoid of wildlife films. Featuring bison, hippopotamuses and many other animals, the dioramas have been credited with raising environmental consciousness among generations of museum visitors.

The exhibits stressed realism, with taxidermied animals in the foreground and curved backgrounds carefully painted to seamlessly preserve the illusion of three dimensions. Mr. Scherer became expert at depicting the play of light in outdoor settings.

“There was this thing about the artists being invisible,” Mr. Scherer told the Brattleboro Reformer in 2007. “If you’re conscious of the painting, then we’ve failed.”

“Dioramas were specifically designed to touch the heart, to reconnect people to nature,” said Stephen Quinn, a longtime employee at the museum and author of a book about its dioramas, “Windows on Nature.” He credited Mr. Scherer with introducing modern art techniques to the dioramas.

Mr. Scherer made important contributions to dioramas depicting hyenas and vultures, colobus monkeys and arctic tundra. To research that one, he spent months in Canada, sketching birds and landscape while being stalked by a pack of wild dogs.

Born in Queens, Mr. Scherer enrolled in an apprenticeship program at the School Art League of New York City. He was hired by the American Museum as an apprentice carpenter on the strength of a polar bear he had sculpted.

At first Mr. Scherer specialized in creating model rocks and trees for dioramas, but eventually convinced James Perry Wilson, a top background painter of his day, to train him as a painter.

He went on to play a major role in the dioramas of white-tailed deer, a golden eagle brooding over her eggs and snow geese. He also restored objects in the museum’s anthropology department.

In 1974, Mr. Scherer retired to Maine, where he tended a large organic garden while continuing to paint and build furniture. He also contributed to dioramas of wildlife at the Maine State Museum in Augusta.

The American Museum of Natural History recently completed a restoration project on its collection of North American Mammal dioramas, restoring some of Mr. Scherer’s work to its former glory.